Nurture your Inner Nature in Nature.

Immortal Tree Qigong harmonizes Western medical knowledge and science with Eastern and traditional health wisdom in each Qigong and Tai Chi session, leading each participant through a moving meditation that connects mind, body and spirit for a myriad of health benefits.

Qigong (pronounced chee-gong) is an ancient Chinese practice that uses posture, movement, breathing, and focus to help people connect with their internal energy for wellness and vitality. It’s a moving meditation that helps you center your mind and body to start your day full of energy, or to reduce stress and breathe deeply at the end of the day, or to shake loose negative thoughts and feelings.  Qigong is about relaxing and looking inwards so you can better understand your self – your health, what you want and who you are.

Tai Chi (pronounced tie-chee) is a type of Qigong practice that uses choreographed movements to help the mind and body move energy—or Qi (pronounced chee)–through the entire body in a quicker, more organized pattern.  Tai Chi is a BEAUTIFUL practice that’s easy to commit to daily and even better when practiced with others.

Each hour-long Immortal Tree Qigong session will start with breathing exercises, warm up, Qi activation and gentle stretching.  Participants will then be guided through flowing movements each punctuated by a short standing meditation.  We will end with a slightly longer guided standing meditation before we bow out.  This should leave a few minutes to answer questions or discuss any insights.

Five Rivers MetroParks Community Fitness sessions on Tuesdays at 6pm (May through September) are free and open to the public at Riverscape.

Sessions at Carriage Hill MetroPark next to Cedar Lake on Saturdays at 10am are $5 per person per session.

All sessions are weather permitting.

Qigong (pronounced chee-gong) is an ancient Chinese practice that uses posture, movement, breathing, and focus to help people connect with their internal energy for wellness and vitality.

It’s a moving meditation that helps you center your mind and body to start your day full of energy, or to reduce stress and breathe deeply at the end of the day, or to shake loose negative thoughts and feelings.  Qigong is about relaxing and looking inwards so you can better understand your self – your health, what you want and who you are.

Although Qigong is a gentle practice, it works your body in ways that may surprise you.  Many participants find strength, balance and renewed vigor after practicing Qigong, in addition to a myriad of other health benefits.

How do I know if Qigong is right for me?

Qigong has been shown to provide many health benefits, such as reduced stress and increased energy.

If you want to find your Way to wellness, Enroll in a session to give Qigong a try!

(Please note, there are some exercises that need to be avoided or adjusted for certain health circumstances.  Please let the Sherpa know if you have any health issues.)

What are the benefits of Qigong?

There are “10-thousand” reasons (Qigong theory term for “many”) why Qigong is good for wellness, including these:

What is the difference between Qigong and Tai Chi?

If you’re interested in a longer explanation, please read more on my teacher’s website at Holden Qigong.

Is Qigong a Martial Art?

The three most common Ways are:

So, yes, Qigong can be practiced as a martial art.

Immortal Tree Qigong sessions are designed specifically to help you learn how to listen to and feel your Qi.  Throughout sessions, principles from the medical, martial and spiritual aspects will be shared so that you can determine what resonates best for you.

If you have a specific interest in one particular area, let your Sherpa know.

A few things Qigong isn’t (and so we learn more about what Qigong is by examining the opposite)
Why Immortal Tree Qigong?

In Qigong theory, there are three forces at work in the world around us:

For those of you who are more comfortable with scientific terms, think of it this way.  The sun gives off light and heat (energy) which trees convert into energy through photosynthesis.  In addition, trees root deeply into the dirt where they absorb additional nutrients (created by the natural composting energy of the Earth) that then nourishes the tree and ostensibly improves it’s the quality of life.  Some even believe that trees never die, they are immortal.

There’s no denying that trees are capable of living tremendously long healthy lives.  And so I have studied many theories and practices claiming to deliver long, healthy life.  But it was in studying and living with some of the healthiest, longest-lived people on Earth in one of the Blue Zones (Ikaria, Greece), I found the secret.

Here it is:  There is no one thing, no one Way that will make you healthy and well.  It’s the ten-thousand tiny things you do every day that support your specific needs that make the difference.  And the closer those ten-thousand things are to Nature, the healthier you’ll be.

It was there I also understood the third force, because the energy of the sun is also converted by other plants that comprise the base of our entire food chain.  And those plants also absorb nutrients from the Earth, which we humans convert into energy for our bodies. “In turn, our energy produces “e-motion” or energy in motion.  “Emotion” has a loaded meaning, often negative.  But emotion comes from Latin meaning “to move,” or “to move out.”  Emotions not only move us, they impact the energy of those around us…like ripples.

I believe that our power lies in these ripples, no matter how tiny.  I’ve witnessed the power of how tiny actions can create massive change in my own life.  So to become an Immortal Tree, to live a healthy live with vitality and wellness we will also be creating a better world for our children and seven generations from now.

Friluftsliv and Shinrin Yoku are two philosophies that come from opposite sides of the planet, but both are fundamental to Immortal Tree Qigong practice.  Friluftsliv (pronounced free-luhft-sleeve), a Nordic term meaning “free air living,” believes that life happens in Nature no matter what the weather.  The key is the right clothing!  Shinrin Yoku, a Japanese term meaning “forest bathing,” believes that health and healing happens by being surrounded by Nature…especially trees.  Immortal Tree Qigong classes are often taught outside because both Friluftsliv and Shinrin Yoku have additional benefits to health and wellbeing that work perfectly with Qigong practice.

How to Be Prepared for Qigoing Outdoors

Clothes that are waterproof, layers

– A ballcap (keeps rain out of your face)

– Loose rain jacket that has a hood

– Quick dry pants and boots (or consider going barefoot in the grass!)

– Waterproof gloves if your hands get cold

Clothes that will keep you warm but mobile

– Something to keep your neck warm (tip: a neck gaiter can be pulled over your nose for a warm face)

– Multiple layers of loose clothing that you can move easily in

– Mittens instead of gloves

Clothes that are light and breathable

– A ballcap (keep sweat and sun out of your eyes)

Clothes to protect skin and eyes

– A ballcap or headband

Clothes to protect from bites

– A ballcap (more helpful if sprayed with bug spray) 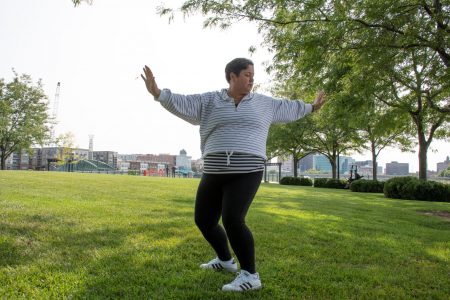 My name is Monica, and I’m your Qigong guide.

My Qigong path has been winding about for almost half my life now.  I began studying martial arts as a young adult, and over time, I’ve migrated from forceful martial arts (Karate and Kung Fu) to martial arts of flow (Tai Chi and Qigong).

I’ve studied the theory, and I’ve practiced each of the sides of Qigong – philosophy, exercise, medicine, martial art, and spirituality.  And now I’m certified as a Qigong instructor under Master Lee Holden of Holden Qigong, and Master Marisa Cranfil of YOQI.

Along the way, I’ve developed a passion for living naturally and want to share what I’ve learned with others who are looking for natural, joyful, preventive ways to wellness.

If you want to learn more about my Qigong Path, visit my honor my teachers page.